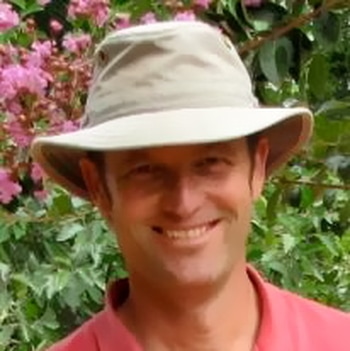 Get Growing is the project of Tim Edmondson, MIAH, Director, Horticulture - 2010 Australian Institute of Horticulturalist of the Year

For over 35 years, Tim has studied and worked in gardens around Canberra. Since 1998, Tim managed the grounds of the Orana School for Rudolf Steiner Education in Canberra.

In 2003, the school grounds and several classrooms were devastated by bushfire. Tim managed the radical transformations of the school landscape that followed the fire. He provided organisation, planning and vision to raise Orana from the ashes.

Tim applied sound horticultural principles and ‘Whole Farm’ planning methodologies to succeed and managed ‘Learnscapes’ to develop a masterplan for the school grounds. The plan was developed over 24 months in collaboration with the school community - teachers, management, students and parents. He completed the project in 2010.

Since mid-2011, Tim has been inspired to share his knowledge, experience and vision more widely, culminating in 'Get Growing'. ​

AIH Horticulturalist of the year 2010

The Australian Institute of Horticulture Inc (AIH) chose Tim Edmondson from the Orana Steiner School as the ‘Australian Horticulturist Of The Year” awarded for 2010.

Tim’s project came about from the devastating Canberra bushfires to create an oasis in the fire stricken school grounds.

The award recognizes Tim’s vision and leadership driving the community based smart ‘learnscape’, recovering from the 2003 Canberra fires and preparing for a hotter, drier future.

A unique and innovative water harvesting solution is used to future-proof the school grounds and respond to climate change. Trees planted by Orana’s students have outgrown expectations while cooling and beautifying the surrounds, setting a new standard for school grounds and environmental education.

The Australian Institute of Horticulture (AIH) celebrated its 50th year in 2010. The Institute was formed in Canberra (Australian Capital Territory) in 1953 and become an incorporated entity in 1960.

Since its inception AIH has become the pre-eminent national body that represents the interests of and professional development of horticulturists in Australia. AIH represents approximately 1000 members throughout Australia and overseas.

The Orana School in Weston Canberra was badly damaged in the 2003 bushfires. As well as losing buildings and sheds, many trees had to be removed. Grounds were badly burnt, resulting in the loss of most of the vegetation and the entire ecosystem of the school was disrupted.

The school shares its 13 hectare grounds with a mob of kangaroos, which depended on its grasses for nourishment. So their needs had to be considered, too.

Under Tim's leadership, the school planted native grasses and thousands of trees to stabilise the area, saved any topsoil that remained and re-establish biodiversity. As part of Tim's post-fire recovery plan, the Orana School also embarked upon a water conservation plan for the entire 13 hectares.

As new buildings were built, the water from down pipes was directed into 'creek beds' – specially made channels dug in the earth and lined with betonite, a canvas-like material impregnated with clay, which is used to line dams.

The channels were filled with sand, rocks and stones, giving them the appearance of a dry creek or river bed. These channels stored the water underground, minimising evaporation and allowing excess to flow into a larger subterranean dam where it could be pumped out for irrigation when needed.

Today, Orana's grounds are thriving again. The areas of water harvesting are increasing as students and teachers find new projects and the kangaroos are looking decidedly healthy.

The Orana School Year 6 students created a frog bog on a dry weed-covered patch of land behind their classrooms.

They cleared land cleared, stones and stored removed rocks for later use and created ponds or bogs by digging out areas of land slightly deeper than others.

They completed the landscape with shrubs, large rocks and stones. After the first the bog began to fill. Very soon after, the students discovered frogs inhabiting their new home. 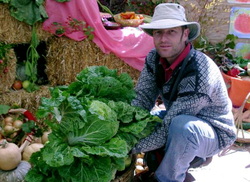 They dug, lined and filled channels in which they planted the vegetables. The veggies did not need much watering thanks to the water flowing from the Resource Centre downpipes filling the channels, which kept the plant roots moist.

The students received a 'Sustainable Cities Award' for their efforts. And even better than that, they enjoyed many scrumptious veggies harvested from the site.

When 2003 bushfires charred the Orana Steiner School on Canberra’s western flank they lit the spark for a teacher to become Australia’s Horticulturalist of the Year.

IEU Member Tim Edmondson reached back to a former life as a horticulturalist, contracting to the capital’s embassies and high commissions, to coordinate regeneration of the 13-hectare site.

He made it a collaborative effort with students, parents and local professionals. The creativity of one of the latter, Paul Totterdell, was central to what has been achieved.

Drawing on an understanding of the Australian environment and its unique methods of water harvesting, it holds the school’s runoff underground in sand-filled trenches, effectively beating evaporation.

Tim suspects it is the future for inland Australia because the embedded energy is “highly effective and can sustain large numbers of people”.

He calls it a combination of “good science and a bit of Dreamtime understanding”.

“When we started we were pretty clear, we didn’t just want to stick plants in the ground. We wanted it all to be sustainable,” Tim said.

Judges at the Australian Horticulturist of the Year Award, a flash ceremony hosted by celebrity gardener Don Burke in Sydney’s Botanic Gardens, were impressed.

At Orana, trees planted by students in 2005 have reached sizes normally expected after 20 years of growth.

The regenerated area provides classic carbon lock-up benefits including cooling, shade and a home for hundreds of bird and insect species.

“It’s a little oasis and you can really feel it when you are in there,” Tim says. “It is an invitation to contemplate and relax.”

IEU member Tim says it is just the first step in a restoration process that will take at least another decade. It is all laid out in the Learnscape Masterplan which took two years of consultation and planning to develop.

He credits the Steiner philosophy for much of his success. Often characterised as freethinking, it encourages adherents to develop their non-material attributes.

Steiner families donate at least 30 hours a year to the “community”.  Soon after Tim’s children started at the Canberra school, he found himself on committees, working bees and, before long, on staff in a system that incorporates horticulture, then agriculture, into the core curriculum.

When it came to redeveloping the school grounds he had a roster of 80 “community members”, including bobcat drivers, landscapers, trades people and architects to call on.

He said sitting down to write his award submission had helped his own recovery from fires that claimed lives and homes in his neighbourhood.

“Getting over something like that isn’t easy. You can go on adrenaline for a few weeks but, after a while, you should realise it isn’t a crisis any longer, it is time to stop reacting and start planning.

“I don’t think I had come to that and the writing helped me to look beyond the ground at my feet and appreciate my family, friends and colleagues at the local Institute of Horticulture.”

Very deep. But Australia’s reigning Horticulturalist of the Year just can’t resist referring to himself as a HOTY.